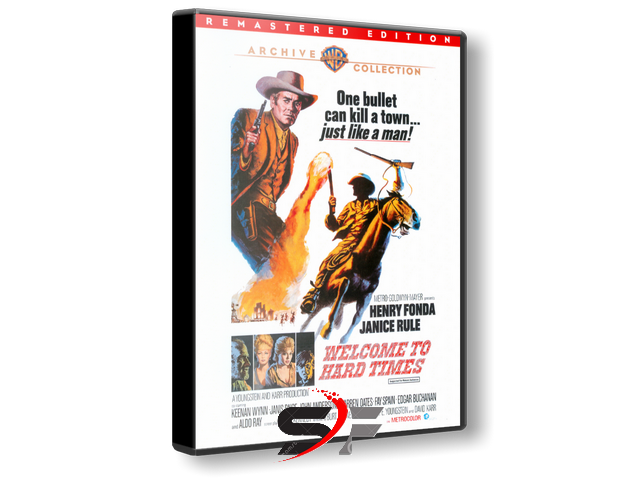 Welcome to Hard Times is a 1967 American western film directed by Burt Kennedy and starring Henry Fonda as the leader of a dying town who is too weak to stand up to a brute terrorizing the few remaining residents.It is based upon a novel by the same name by E. L. Doctorow

A vicious stranger, the "Man from Bodie" (Aldo Ray), terrorizes the small settlement of Hard Times. (In Doctorow's book, the town is in the Dakota territory. In the movie, it is assumed to be in western Nevada.) He kills the only men who stand up to him, town founder Mr. Fee (Paul Birch) and town undertaker Mr. Hanson (Elisha Cook, Jr.), as well as raping and killing Fee's girlfriend Flo (Ann McCrea). Before he leaves, he burns down the handful of buildings.

Only a few people stay, among them Will Blue (Henry Fonda). Blue takes in Fee's young orphaned son Jimmy (Michael Shea) and convinces his woman Molly (Janice Rule) to stay there with them. A few other people arrive. Zar (Keenan Wynn) and his four saloon girls settle in to serve the nearby miners. Isaac Maple (John Anderson) comes looking for his long-gone storekeeper brother, so Blue persuades him to reopen the general store. A drifter, Leo Jenks (Warren Oates), also lazes around town.

Blue tries hard to build a family and a prosperous community, but Molly despises him for not standing up against the Man from Bodie and is obsessed with revenge against him for what he did. They both expect the Man will return in the spring. Molly works on Jenks, a fine shot, and even infects Jimmy with her consuming hatred, getting him a shotgun.

Finally, the villain shows up and resumes his terrorizing ways. Molly persuades Jenks to go after him. Jenks ends up killing Zar by mistake and is gunned down. Blue is wounded in the shoulder, but then, the Man runs out of bullets and Blue shoots him several times.

Blue carries the body home to show Molly. When she gingerly approaches, the dying Man revives and grabs her hand. Her panicked yell for help brings Jimmy running with his shotgun. Blue tries to grab the weapon, but it goes off, hitting the Man in the face killing him, but also hitting Molly in the stomach. Just before she dies, she asks Blue to hold her. Later, from her gravesite, Blue and Jimmy see a growing town.

Hard Times is a tiny town clinging to life. And life takes a turn for the worse when a sadistic drunk (Aldo Ray) rides into town. He rapes and murders a saloon girl, kills the town founder who rushes to her defense, steals a horse, and then guns down its owner. After urging caution, town mayor Will Blue (Henry Fonda) decides to intervene, using a second saloon girl (Janice Rule as Molly) as a distraction. But Blue flees after exchanging a couple of gunshots with the man, leaving Molly in the hands of the sadist.By the time he finally rides off, Hard Times is in ashes. Blue, a man on the cusp of 50, a man who’s fled every challenge he’s faced in life, is determined to stay put now and help the town rebuild. He takes in Jimmy Fee, the town founder’s son, as his own. He nurses Molly back to health and eventually tells newcomers to town that she’s his wife. But she’s tortured by memories of what happened. And everyone fears that one day the killer from Brodie will return.