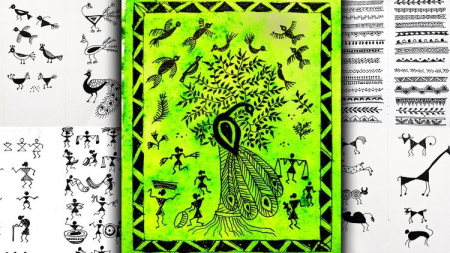 I'm thrilled to have you are here, Welcome to Folk art Warli tribal art. Please Check the WARLI PDF: PASSWORD inside one video

Do you want to learn about a different country's folk art illustration? Do you struggle with painting a variety of folk arts ? Do you want to save folk arts from dying as fewer artists are nowadays doing this?

If you agree with all the above this class is for you.

In this Warli painting, you will learn the Full detailed warli painting step by step. You will be learning how to paint some beautiful Madhubani painting Folk art with the help of watercolors. This is a watercolor based painting.

You shall explore a beautiful world of folk illustration with the help of watercolor with me in this class. If you are interested in learning, come join with me in my class. This class is structured for the bner level.

Thank you so much for taking this course on warli painting. Before starting it is my duty to convey you some history about the art work.If you dont like this you may skip this particular video but I will strongly suggest to watch this so that you feel more connected.

Warli paintings are believed to be one of the oldest form of art in history. It is a form of tribal art which owes its origin to the state of Maharashtra in India. This art is very popular among the tribal community, however till date it has not gained any special recognition outside India.

Warli painting is a style of tribal art mostly created by the tribal people from the North Sahyadri Range in India. This range encompasses cities such as Dahanu, Talasari, Jawhar, Palghar, Mokhada, and Vikramgadh of Palghar district. This tribal art was originated in Maharashtra, where it is still practiced today.

The Warli tribe is one of the largest in India, located outside of Mumbai. Despite being close to one of the largest cities in India, the Warli reject much of contemporary culture. The style of Warli painting was not recognised until the 1970s, even though the tribal style of art is thought to date back as early as 10th century A.D. The Warli culture is centered around the concept of Mother Nature and elements of nature are often focal points depicted in Warli painting. Fag is their main way of life and a large source of food for the tribe. They greatly respect nature and wildlife for the resources that they provide for life.]Warli artists use their clay huts as the backdrop for their paintings, similar to how ancient people used cave walls as their canvases.

Unassuming Warli figures painted in white on red ochre walls might not seem like much to the untrained eye. But a closer look will tell you that there's more to Warli than what meets the eye. It is not just an art form, but a way of life for the Warli (Varli) tribes from the mountains and coastal regions in and around the borders of Maharashtra and Gujarat. This art form that originated around 3000 BC has an enigmatic appeal to it.

The intricate geometric patterns of flowers, wedding rituals, hunting scenes and other everyday activities are quite popular among fashion designers and home décor brands. Those from the states of Gujarat and Maharashtra surely have a sense of sennt attached to the art form as they've seen it on the walls of rural schools and homes way before they became popular on modern lifestyle products. The simple, yet beautifully delicate patterns have a certain raw appeal about them.

Warli art to some extent makes us think of being environmentally conscious and finding joy in simple things of life. The Warli people lead fairly simple lives. Earlier, they worshipped nature and depended on nature for food and everyday living. They did not believe in disrupting nature or taking more than they needed. The Warli people believe in harmony between nature and man, and these beliefs are often reflected in their paintings.

This train of thought also holds true for our lives today. A lot of urban folk are now adopting a minimalist lifestyle by staying away from technology whenever possible, eating clean, embracing handloom and taking a closer look at science behind ancient customs and traditions. So, it isn't much of a surprise that traditional art forms like Warli are making their way back into our society to rd us of the simple pleasures of life.

The tribes have also used Warli paintings to impart knowledge. Today, it stands tall among other forms of painting with Maharashtrian artists like Jivya Mashe and his sons Balu and Sadashiv striving hard to keep the art form alive. In fact, Mashe was awarded the Padma Shri in 2011 for making the art form popular in international circuits.

See you in my class.

Very bner having no experience in art at all

People who are passionate about folk arts

People who want to know about indian culture