Viral Mythology: How the Truth of the Ancients was Encoded and Passed Down through Legend, Art, and Architecture 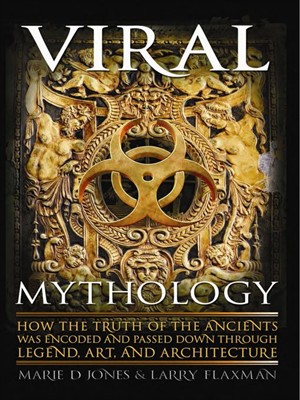 Viral Mythology: How the Truth of the Ancients was Encoded and Passed Down through Legend, Art, and Architecture by Marie Jones and Larry Flaxman

Behind every myth, fairy tale, and legend–hidden within the art, song, and structures of ancient times–is an encoded layer of wisdom, science, and truth passed down throughout history. This book will examine how information went "viral" long before the Internet, and served as the foundation for mythology, sacred architecture, and symbolic imagery throughout the ancient world.
Viral Mythology reveals:
• How primitive and ancient cultures conveyed cutting-edge scientific knowledge in their origin stories and myths
• Why esoteric knowledge was hidden in symbols, art, and architecture during times of religious oppression and persecution
• How stories, songs, and art served to describe actual historical events
• Why diverse civilizations told the same stories and created the same art with common themes and symbols, despite no apparent communication
From the great myths of the Greek, Roman, and Norse to the texts of the world's major religions, from folklore and fairy tales of old to sacred edifices and monuments, from cave paintings to the mysterious symbology of the Tarot, Viral Mythology uncovers the information highway of the past, and explores how it affects the more modern methods of communication today.
"[There is] a growing need to further understand the significance of ancient symbolism as it continues to accompany us in these modern times. This symbolism gets to the core of what makes us human… and [plays] an integral part in the creation, development, and sustainment of our overall collective psyche."
–John Richard Ward, coauthor of The Exodus Reality
DOWNLOAD