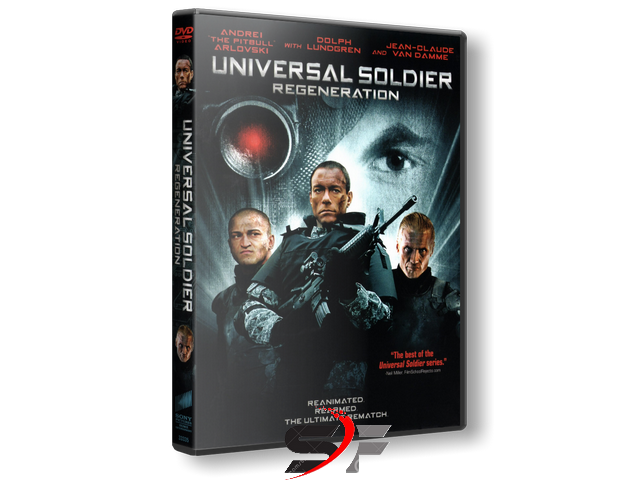 Universal Soldier: Regeneration is a 2010 American science fiction action film directed and co-edited by John Hyams, written by Victor Ostrovsky, and starring Jean-Claude Van Damme and Dolph Lundgren. It is an alternative sequel to the original Universal Soldier from 1992, ignores the events from the 1999 theatrical sequel Universal Soldier: The Return and the two television sequels that were produced in 1998.

Mixed martial artist Andrei Arlovski stars as NGU (Next Generation UniSol), a Universal Soldier of the latest type, along with fellow fighter Mike Pyle as Capt. Kevin Burke. Tekken star Jon Foo appears as a cameo in the film as one of the four UniSols. In the United States the film was released directly to video by Sony Pictures Home Entertainment on February 2, 2010. However, it had a theatrical release in the Middle East and Southeast Asia and some other parts of the world. The film has received average to mixed reviews and theatrically grossed $844,000 with a production budget of $9 million.

A group of terrorists led by Commander Topov (Zahari Baharov) kidnap the Ukrainian Prime Minister's son and daughter and hold them hostage, demanding the release of their imprisoned comrades within 72 hours. In addition, they have taken over the crippled Chernobyl Nuclear Power Plant and threaten to detonate it if their demands are not met. It is revealed that among the ranks of the terrorists is an experimental Next-Generation UniSol (NGU) (Andrei Arlovski), who was smuggled in by rogue scientist Dr. Robert Colin (Kerry Shale). U.S. forces join up with the Ukrainian Army at the plant, but quickly retreat when the NGU slaughters most of them effortlessly. Dr. Richard Porter (Garry Cooper), Dr. Colin's former colleague on the Universal Soldier program, revives four UniSols to take down the NGU, but they are systematically eliminated.

Former UniSol Luc Deveraux (Jean-Claude Van Damme), who is undergoing rehabilitation therapy in Switzerland with Dr. Sandra Fleming (Emily Joyce) with the goal of rejoining society, is taken back by the military to participate in the mission. As the deadline nears its expiration, the prime minister announces the release of the prisoners. The terrorists, having gotten what they wanted, rejoice and shut off the bomb. Dr. Colin, however, is not pleased with the outcome, as he feels his side of the business is not done. As the NGU is programmed not to harm the terrorists, Dr. Colin unleashes his second UniSol: a cloned and upgraded version of Andrew Scott (Dolph Lundgren) - Deveraux's nemesis - who quickly kills Commander Topov. However, Dr. Colin never considered Scott's mental instability, and he is killed by his own creation. Scott then reactivates the bomb before heading out to hunt the children.

In the midst of the chaos, Capt. Kevin Burke (Mike Pyle) is sent in to infiltrate the plant and rescue the prime minister's children. He is successful in locating them and leads them toward safety. On their way out, they encounter the NGU. The children flee as Burke tries in vain to hold off the NGU, who stabs him to death after a brutal fight.

With 30 minutes remaining on the bomb's timer, a re-conditioned Deveraux is geared up and sent to the plant, where he kills every terrorist he encounters. He searches the buildings and finds the children cornered by Scott. Scott, who has distorted memories of Deveraux, is about to kill the children when Deveraux attacks and a grueling fight ensues. In the end, Deveraux impales Scott on the forehead with a lead pipe and fires a shotgun through it, blowing his brains out.

As Deveraux escorts the children to safety, they are attacked by the NGU. Deveraux and the NGU take the fight to the site of the bomb, with less than two minutes remaining. During the melee, Deveraux removes the detonator and jams it in the back of the NGU's uniform as they both jump out of the reactor chamber. NGU pulls the detonator off his back as it explodes, taking him with it. U.S. soldiers quickly arrive on the scene and tend to the children as Deveraux leaves. Burke's body is placed in a black bag and taken away, as well as recovered pieces of the NGU.

In Langley, Virginia, Burke's body is shown stored in a cryogenic chamber as a new UniSol, along with multiple clones made of him.