The Mammoth Book of International Erotica 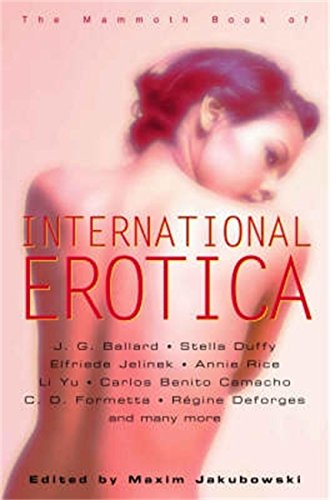 Ever since the collapse of the Tower of Babel, sex has been the common language uniting men and women throughout the world. Erotic prose is not just an Anglo-Saxon phenomenon but a universal one - as this revised new edition of the influential "Mammoth" volume gloriously demonstrates, with a miscellany of exciting stories from over 16 different countries and languages Editor Maxim Jakubowski has cherry-picked the finest new writing from countries, such as France and Italy, both so fertile right now that they could fill their own volumes. The anthology features stories by Nobel Prize winner Elfriede Jelinek, Orange Prize-shortlisted Stella Duffy, plus ten previously uncollected tales including: 'Jou Pu Tuan' by Li Yu, 'The Sex Lives of Chameleons' by C.D. Formetta, 'Three for the Money' by Marilyn Jaye-Lewis, 'Memories that Linger On' By Carlos Benito Camacho, 'Opera' by Sonia Rykiel, 'The New Fiancee' by N.T. Morley, and 'Tarot' by Florence Dugas.