Pinky and the Brain is an American animated television series. It was the first animated television series to be presented in Dolby Surround and the fourth collaboration of Steven Spielberg with his production company, Amblin Entertainment, and produced by Warner Bros. Animation. The characters first appeared in 1993 as a recurring skit on Animaniacs. It was later spun off as a series due to its popularity, with 66 episodes produced. The characters later appeared in the series Pinky, Elmyra & the Brain.[2]

Pinky and Brain are genetically enhanced laboratory mice who reside in a cage in the Acme Labs research facility. Brain is self-centered and scheming, while Pinky is good-natured but feeble-minded. In each episode, Brain devises a new plan to take over the world which ultimately ends in failure: usually due to the impossibility of Brain's plan, Brain's own arrogance or overconfidence, Pinky's bumbling, or just circumstances beyond their control. In common with many other Animaniacs shorts, many episodes are in some way a parody of something else, usually a film or novel. 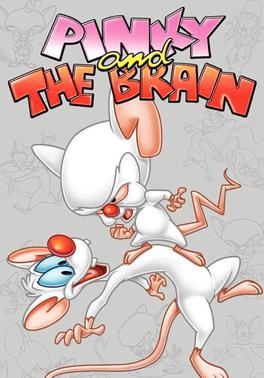 Pinky and the Brain - Wikipedia