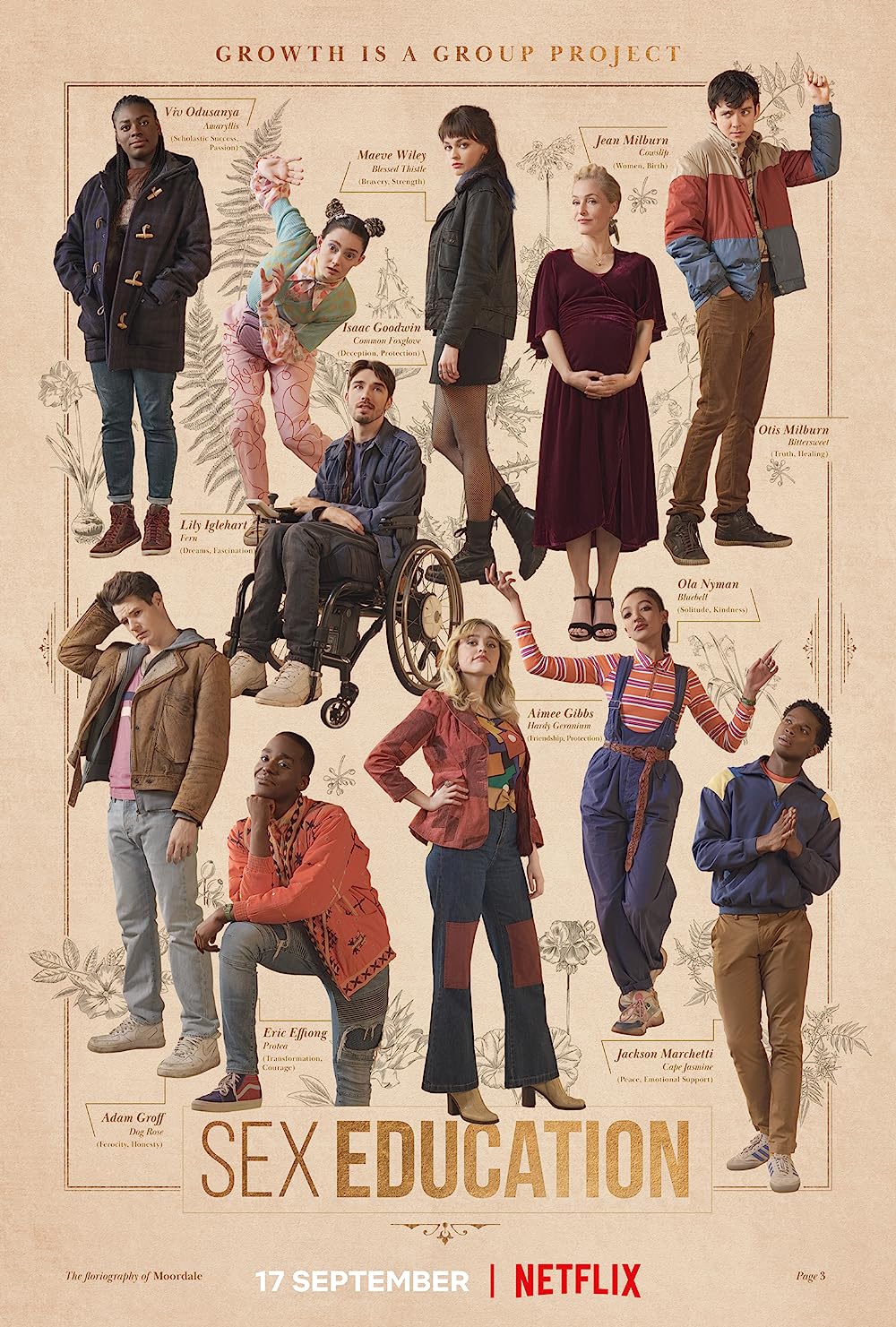 Sex Education: Created by Laurie Nunn. With Asa Butterfield, Gillian Anderson, Emma Mackey, Ncuti Gatwa. A teenage boy with a sex therapist mother teams up with a high school classmate to set up an underground sex therapy clinic at school.

Sex Education primarily follows Otis Milburn, an insecure student at Moordale Secondary School. Otis begins the series ambivalent about sex, in part because his divorced mother Jean is a sex therapist who frequently has affairs with her male suitors, but is unable to maintain romantic relationships. His best friend is Eric Effiong, the gay son of Ghanaian-Nigerian immigrants. Over the course of the series, Otis becomes close with Maeve Wiley, a confident student whose high intelligence is overshadowed by her troubled past.

Other students at Moordale include Adam Groff, the headmaster's son who develops a bullying nature out of his own insecurity and self-loathing; Jackson Marchetti, the head boy struggling to meet the high expectations set for him; Ruby Matthews, Anwar, and Olivia Hanan, members of a popular clique known as "The Untouchables"; Aimee Gibbs, an Untouchable who is secretly best friends with Maeve; and Lily Iglehart, an eccentric girl determined to lose her virginity. The school is later joined by Ola Nyman, whose father Jakob is a widowed plumber. Jakob and Jean begin to date, which creates tensions due to Otis and Ola entering into a relationship of their own.

In the first series, Otis set up a sex therapy business with Maeve to help their fellow students with their sexual problems.[1][2] Their business becomes a success, but conflict arises when Otis finds himself becoming attracted to Maeve.

In the second series, Otis is hit with the reality and pressures of a high school romance after Ola becomes his girlfriend. Their romance is further tested by the introduction of new students who challenge the status quo at Moordale and a chlamydia outbreak that causes students to question and struggle with topical issues.[3][4]

In the third series, Otis continues to face challenges in the new year in his fling with Ruby, while other relationships including Eric and Adam are made official. With his mother Jean expecting a baby in the future, and the introduction of the new headmistress Hope, who has big plans for Moordale, the inevitable revamp at school has the potential to cause an extra set of complications for all students.