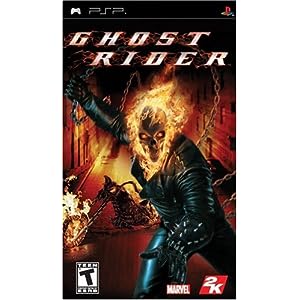 Some meetings should never take place, as well as some of the words should never fly from his lips. Otherwise, then it would be difficult to prove that you did not enter into transactions. Professional driver Johnny Blaze has promised to give his life for the life of his father. In exchange for the execution of desire Satan turned Johnny into a ghost-killer, doomed for centuries to ride a motorcycle and hell to execute the instructions of Darkness!

Founded on the comic book company Marvel, Ghost Rider tells the story of the driver who cursed himself Mephistopheles. But despite the agreement made with the darkness, Johnny Blaze in no hurry to part with their domestic Ya instead of eliminating unwanted hell people, Ghost Rider begins a war with the very evil! One after another disappear servants of the devil, closer Johnny chosen to who condemned him to unbearable suffering, flaring up in him the fire of revenge! But what happens when the long-awaited meeting finally be held?
History, conquered the world! First appeared in 1972, comic Ghost Rider went on a planet with a circulation of 45 million copies! Interest in the spectral racer is not quenched by this day! Continuation of the famous comic strip from 2005 involved a writer Garth Ennis and artist Clayton Crain, and the company Sony Pictures recently released in theaters the same movie.

No mercy! Do not pity those who had once been hit in hell. Arrange them deadly carnage with a chain and a rifle from a bright flame! Only then can send the servants of Lucifer back into oblivion.
Gift of Satan! Ghost Motorcycles has powerful forces that will help in a difficult war. He rides on the water and soars into the air easily demon of flame and steel. Generous Gift of Darkness turn against herself!
The road to hell! The way the ghost rider leads him to hell, where he held the most bitter fight. But until then Johnny got better things upstairs. You will visit famous places in the film, including the Quentin Carnival and Caretaker's Graveyard, and ride on the wall a huge skyscraper.
Forces are growing! Improve your motorbike and a fiery chain, explore new deadly techniques, train rider.
Acceptance surprises! The game is hidden mass of amusing details. Thematic drawings, secret characters, interviews with developers will feel the atmosphere of Ghost Rider!
Ghost Rider in safe hands! Over the shoulders with the developers several proven hits. Studio Climax prove their skills on the example of ATV Offroad Fury 3, Sudeki and the MotoGP: Ultimate Racing Technology.
Only on PSP! Especially for the handheld console, set new levels, bosses and the whole game modes. With the help of wireless technology Wi-Fi, you can compete with the three living opponents and take part in the collective race to hell bikes!

Extras. Information:
The image of the game - ISO