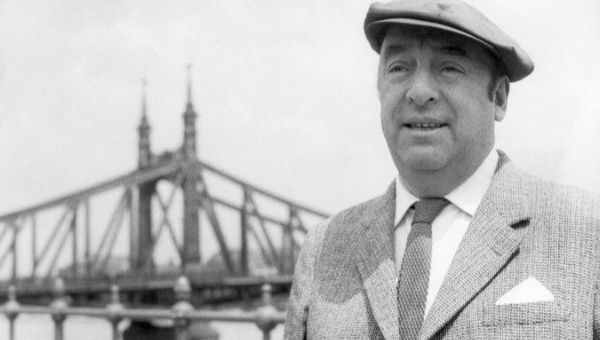 PABLO NERUDA (1904-1973) was a Chilean poet, diplomat and politician. He won the 1971 Nobel Prize for Literature "for a poetry that with the action of an elemental force brings alive a continent's destiny and dreams." Gabriel García Márquez called him "the greatest poet of the 20th century -- in any language."

Neruda wrote in a wide variety of styles, including surrealist poems, historical epics, overtly political manifestos, a prose autobiography, and erotically charged love poems that are widely regarded as some of the most romantic ever written. In a famous essay, "On Impure Poetry" (included in Belitt's edition of SELECTED POEMS), Neruda calls for "a poetry as impure as old clothes, as a body with its foodstains and its shame, with wrinkles, observations, dreams, wakefulness, prophesies, declarations of love and hate, stupidities, shocks, idylls, political beliefs, negations, doubts, affirmations, and taxes."

This collection features a large selection of his poetical works, many in bilingual editions. Highlights include TWENTY LOVE POEMS (1924) that launched him into the international spotlight; RESIDENCE ON EARTH (1933), a collection of esoteric surrealistic poems which marked a literary breakthrough; CANTO GENERAL (1950), an epic poem tracing the history of Latin America and evoking the grandeur of its landscape; SELECTED ODES (1954-57); THE CAPTAIN'S VERSES (1963), passionately sensuous and exploding with all the erotic energy of a new love; ISLA NEGRA (1964), where Neruda "in the company of his muse, walked alongside the source of his most lyrical inspiration, the sea ... and discovered a new way of seeing, as the ocean became a living metaphor for the infinite riches of the world"; and THE BOOK OF QUESTIONS (1973), finished only a month before his death and composed of 316 unanswerable questions, by turns Orphic, comic, surreal, and poignant.

In his MEMOIRS (1974), Neruda explains his views on poetry and describes the circumstances that inspired many of his poems, and creates a revealing record of his life as a poet, a patriot, and one of the twentieth century's true men of conscience. PASSIONS AND IMPRESSIONS (1978) is both a sequel to and an enlargement of the Memoirs, recording a lifetime of travel, of friendships and enmities, of exile and homecoming, of loss and discovery, and of history both public and personal. Above all, it is a testament to Neruda's love for Chile -- for its citizens, its flora and fauna, and its national identity.

This is an update of a previous torrent. It includes 10 additional books, most of them new scans.


The following books are in PDF format unless otherwise indicated:

* Book of Questions, The (Copper Canyon, 1991). Translated by William O'Daly.

* Selected Odes of Pablo Neruda (University of California, 1990). Translated with an Introduction by Margaret Sayers Peden.

* Spain in Our Hearts: Hymn to the Glories of the People at War (New Directions, 2005). Translated by Donald D. Walsh. -- ePUB