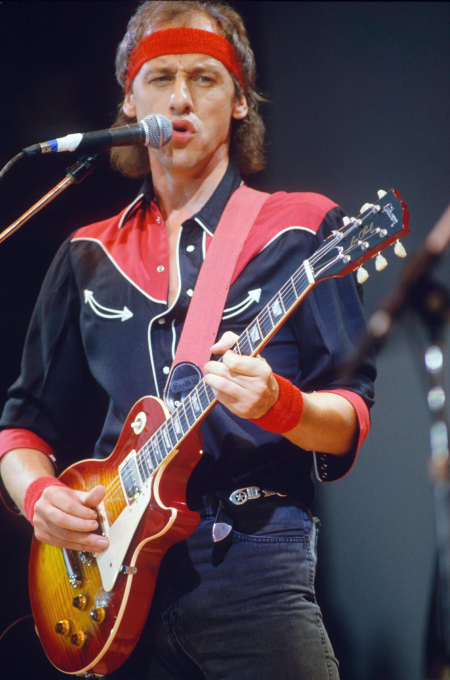 ​
Mark Freuder Knopfler OBE (/ˈnɒpflər/ NOP-flər; born 12 August 1949) is a British singer-songwriter, guitarist, and record producer. He became known as the lead guitarist, singer and songwriter of the rock band Dire Straits. He pursued a solo career after leaving the band in 1987. Dire Straits reunited in early 1991, but dissolved again in 1995. He is now an independent solo artist.

Knopfler was born in Glasgow, Scotland, and raised in Blyth, near Newcastle in England, from the age of seven. After graduating from the University of Leeds and working for three years as a college lecturer, Knopfler co-founded Dire Straits with his younger brother, David Knopfler. The band recorded six albums, including Brothers in Arms (1985), one of the bestselling albums in history. After they disbanded in 1995, Knopfler began a solo career, and has produced nine solo albums. He has composed and produced film scores for nine films, including Local Hero (1983), Cal (1984), The Princess Bride (1987), Wag the Dog (1997) and Altamira (2016). He has produced albums for Tina Turner, Bob Dylan, and Randy Newman.

Described by Classic Rock as a virtuoso, Knopfler is a fingerstyle guitarist and was ranked 27th on Rolling Stone's list of the "100 Greatest Guitarists of All ". As of 2009, he and Dire Straits had sold more than 120 million records. A four- Grammy Award winner, Knopfler is the recipient of the Edison Award, the Str Award and the Ivor Novello Award, as well as holding three honorary doctorate degrees in music from universities in the United Kingdom. Knopfler was inducted into the Rock and Roll Hall of Fame as a member of Dire Straits in 2018