They originally performed a speed metal style with Venom influences. Kreator’s work began in the vein of thrash metal but ventured into Industrial metal and Gothic metal from 1992 to 1999, before eventually returning to their classic thrash sound to date.

Kreator has released thirteen studio albums, two EPs, one live album and three compilation albums. The band released its debut album Endless Pain in 1985. Although many of their previous albums, including Pleasure to Kill (1986), were quite popular in the United States, Kreator did not experience major American commercial success until the 2009 release of their twelfth studio album, Hordes of Chaos, which peaked at number 165 on the Billboard 200 and debuted at No. 16 on the Media Control Charts. Hordes of Chaos was followed three years later by Phantom Antichrist, which was also successful and peaked at higher chart positions in many countries. Kreator has been working on a new album, which is due for release in 2016. 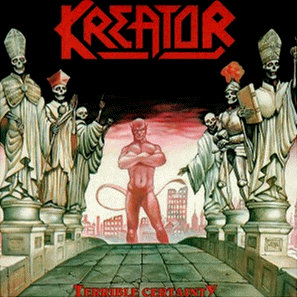