The Shawshank Redemption (1994)
Rating: 9.2
Release Date: 23 September 1994(USA)
Director: Frank Darabont
Cast: Tim Robbins, Morgan Freeman, Bob Gunton, William Sadler
Genre: Crime, Drama
Language: English
Plot:Andy Dufresne is a young and successful banker whose life changes drastically when he is convicted and sentenced to life imprisonment for the murder of his wife and her lover. Set in the 1940's, the film shows how Andy, with the help of his friend Red, the prison entrepreneur, turns out to be a most unconventional prisoner.
Kliknite za proširenje...

The Godfather (1972)
Rating: 9.2
Release Date: 24 March 1972(USA)
Director: Francis Ford Coppola
Cast: Marlon Brando, Al Pacino, James Caan, Diane Keaton
Genre: Crime, Drama
Language: English, Italian, Latin
Plot:The story begins as "Don" Vito Corleone, the head of a New York Mafia "family", oversees his daughter;s wedding. His beloved son Michael has just come home from the war, but does not intend to become part of his father;s business. Through Michael;s life the nature of the family business becomes clear. The business of the family is just like the head of the family, kind and benevolent to those who give respect, but given to ruthless violence whenever anything stands against the good of the family. Don Vito lives his life in the way of the old country, but times are changing and some don;t want to follow the old ways and look out for community and "family". An up and coming rival of the Corleone family wants to start selling drugs in New York, and needs the Don;s influence to further his plan. The clash of the Don;s fading old world values and the new ways will demand a terrible price...
Kliknite za proširenje...

The Good, the Bad and the Ugly (1966)
Rating: 9.0
Release Date: 29 December 1967(USA)
Director: Sergio Leone
Cast: Clint Eastwood, Eli Wallach, Lee Van Cleef, Aldo Giuffrè
Genre: Adventure, Western
Language: Italian
Plot:Blondie (The Good) is a professional gunslinger who is out trying to earn a few dollars. Angel Eyes (The Bad) is a hit man who always commits to a task and sees it through, as long as he is paid to do so. And Tuco (The Ugly) is a wanted outlaw trying to take care of his own hide. Tuco and Blondie share a partnership together making money off Tuco;s bounty, but when Blondie unties the partnership, Tuco tries to hunt down Blondie. When Blondie and Tuco comes across a horse carriage loaded with dead bodies, they soon learn from the only survivor (Bill Carson) that he and a few other men have buried a stash of gold in a cemetery. Unfortunately Carson dies and Tuco only finds out the name of the cemetery, while Blondie finds out the name on the grave. Now the two must keep each other alive in order to find the gold. Angel Eyes (who had been looking for Bill Carson) discovers that Tuco and Blondie meet with Carson and knows they know the location of the gold...
Kliknite za proširenje... 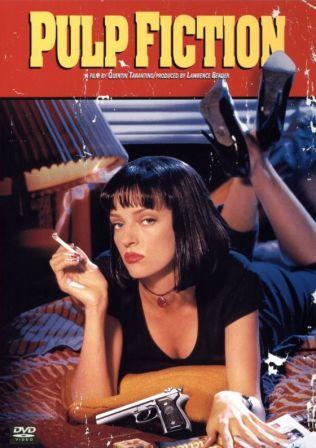 Pulp Fiction (1994)
Release Date: 14 October 1994 (USA)
Director: Quentin Tarantino
Cast: John Travolta, Uma Thurman and Samuel L. Jackson
Genre: Crime | Thriller
Language: English
Plot:Jules Winnfield and Vincent Vega are two hitmen who are out to retrieve a suitcase stolen from their employer, mob boss Marsellus Wallace. Wallace has also asked Vincent to take his wife Mia out a few days later when Wallace himself will be out of town. Butch Coolidge is an aging boxer who is paid by Wallace to lose his next fight. The lives of these seemingly unrelated people are woven together comprising of a series of funny, bizarre and uncalled-for incidents.
Kliknite za proširenje...

Schindler's List (1993)
Stars: Liam Neeson, Ralph Fiennes and Ben Kingsley
Runtime: 195 min | Turkey: 185 min (TV version)
Creators:
Writer: Thomas Keneally
Director: Steven Spielberg
Country: USA
Language: English | Hebrew | German | Polish (only a few words)
Plot:Oskar Schindler is a vainglorious and greedy German businessman who becomes unlikely humanitarian amid the barbaric Nazi reign when he feels compelled to turn his factory into a refuge for Jews. Based on the true story of Oskar Schindler who managed to save about 1100 Jews from being gassed at the Auschwitz concentration camp. A testament for the good in all of us.
Kliknite za proširenje...

12 Angry Men (1957)
Stars: Henry Fonda, Lee J. Cobb and Martin Balsam
Runtime: 96 min
Creators:
Writer: Reginald Rose
Director: Sidney Lumet
Country: USA
Language: English
Plot:The defense and the prosecution have rested and the jury is filing into the jury room to decide if a young Spanish-American is guilty or innocent of murdering his father. What begins as an open and shut case of murder soon becomes a mini-drama of each of the jurors' prejudices and preconceptions about the trial, the accused, and each other. Based on the play, all of the action takes place on the stage of the jury room
Kliknite za proširenje...

Stars: Leonardo DiCaprio, Joseph Gordon-Levitt and Ellen Page
Runtime: 148 min
Writer: Christopher Nolan
Director: Christopher Nolan
Country: USA | UK
Language: English | Japanese
Plot Dom Cobb is a skilled thief, the absolute best in the dangerous art of extraction, stealing valuable secrets from deep within the subconscious during the dream state, when the mind is at its most vulnerable. Cobb's rare ability has made him a coveted player in this treacherous new world of corporate espionage, but it has also made him an international fugitive and cost him everything he has ever loved. Now Cobb is being offered a chance at redemption. One last job could give him his life back but only if he can accomplish the impossible-inception. Instead of the perfect heist, Cobb and his team of specialists have to pull off the reverse: their task is not to steal an idea but to plant one. If they succeed, it could be the perfect crime. But no amount of careful planning or expertise can prepare the team for the dangerous enemy that seems to predict their every move. An enemy that only Cobb could have seen coming.
Kliknite za proširenje...

One Flew Over the Cuckoo's Nest (1975)
Stars: Jack Nicholson, Louise Fletcher and Danny DeVito
Runtime: 133 min
Creators:
Writer: Lawrence Hauben
Director: Milos Forman
Country: USA
Language: English
Plot:McMurphy thinks he can get out of doing work while in prison by pretending to be mad. His plan backfires when he is sent to a mental asylum. He tries to liven the place up a bit by playing card games and basketball with his fellow inmates, but the head nurse is after him at every turn. Written by Colin Tinto
Kliknite za proširenje...