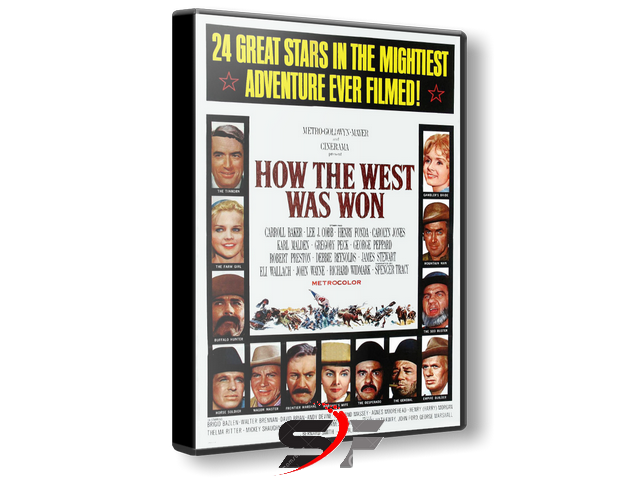 
Three directors, about 10 major stars and a new Cinerama system add up to a three-hour Western epic that traces 50 years of Prescott family history, from their trip West to the days when the West was settling down.One daughter, Eve (Carroll Baker) falls in love with a trapper (James Stewart). But he’s the wandering sort, set in his “sinful” ways and bound to Pittsburgh to be sinful after selling his beaver pelts.When Eve loses both of her parents in a raft accident on the rapids, she decides to settle and start farming where they are buried. Reluctantly, the trapper agrees to settle down with her, until he and his oldest son are called by duty to serve for the North in the Civil War.Meanwhile, the other daughter Lily (Debbie Reynolds) dreams of big-city life and figures she should be heading East, not West. But she finds herself performing song and dance routines for men in St. Louis and dreaming of marrying one who is rich.Then she falls for a gambler named Cleve Van Valen (Gregory Peck). He isn’t rich, but she might just be. Word comes that one of her admirers has left Lily a gold mine in California. So she heads West in a wagon train; Cleve follows along.Only the mine turns out to be played out by the time she reaches California. Cleve, dreaming of marrying rich himself, abandons her. She returns to singing and dancing for a living, until they meet again on a steamboat.This time, Cleve has an idea for making a fortune by getting in on the ground floor of the railroad’s westward expansion.