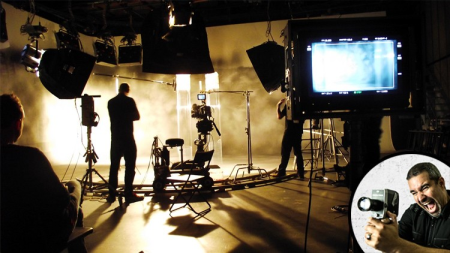 Direct a short film, feature film or any narrative content.​
A love for filmmaking and directing the camera
Understand basic filmmaking concepts
In this online course you'll learn When to Move the Camera in your next film and video production. The key here is that camera movement must be invisible. It should serve the story without calling attention to itself. Next, learn How To Move the Camera most effectively by systematically fulfilling Five Tasks when designing each moving master shot. Finally, learn how a master of visual design like Zemeckis customizes his application of these Five Tasks to the unique demands of each scene.
They DON'T teach you this in Film School!
THIS COURSE IS AMAZING!!! I'm learning SO FREAKIN MUCH from it, and it's totally blowing my mind. Thanks so much to Gil and Alex for putting this course together. I'm a director working on my first horror film, which has a bit of action in it, and this course is totally giving me rocket boots. If you have more courses from Gil, please let me know and TAKE MY MONEY! - Colby R Rice
Excellent content. But you'd better pay attention or you will miss something. This course is packed with loads or useful and well explained stuff. - Mr Mick Farmer
Instructor is clearly in command of craft and engages with questions, simple explanations and familiar examples. Video and audio are excellent. - Bill Halford
Veteran film and television director Gil Bettman will teach you how to enhance drama and heighten action by using different lenses. This is the key to Lensmanship - the technique which Spielberg borrowed from Wells, Kubrick and others to transform the look of today's films.
Once you have grasped Lensmanship you are ready for the final lesson -- How to Shoot Action Sequences. Gil will show you how Kathryn Bigelow, John Woo and others ignite the screen by putting the camera in the right place and using the right lenses. Here's what will be covered in the course.
Why you must shoot with a moving camera
When to move the camera
Why all camera movement should be invisible
The three kinds of camera movement that are always invisible
How to move the camera - shoot the best moving master shot
The five tasks of a moving master:
Establishes geography and believability
Eliminates edits
Generates eye candy
Focuses the audience on the center of the drama
Picks up coverage
How to customize the five tasks to each scene
Examples: dailies from:
Movies for TV
Low budget features
Big budget features directed by Bob Zemeckis
Lensmanship
How the look of 3 different lenses is the key to understanding all lenses
The three ways that lenses change the look of a shot
Perspective
Field of Vision
Depth of Field
Shooting Action
The 3 key components to shooting action
Put the camera in the right place
Breaking down your shots
Put the right lens on the camera
How lenses affect motion in the frame
Get the right number of pieces
How coverage heightens energy
How to shoot a chase
How to shoot a fight
Very helpful. Adds depth to your understanding and intuitive insights which you surely had if you happened to play with video shooting and editing without doing any learning beforehand. It's enriching. The movie samples are great as the clarify the points. Love it! - Yosi Tsitsu
So what are you waiting for. Jump start your filmmaking career as a film director.
Independent Filmmakers
Webseries Directors
Television Directors
Film Students
Anyone who wants to learn how to move the camera to better tell the story
Cinematographers
Film Producers