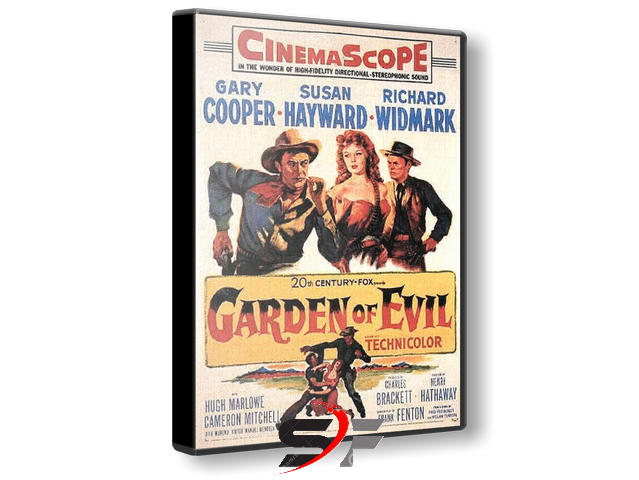 Garden of Evil is a 1954 American Technicolor Western film directed by Henry Hathaway, about three somewhat disreputable 19th-century soldiers of fortune, played by Gary Cooper as an ex-lawman, Richard Widmark as a gambler, and Cameron Mitchell as a bounty hunter, who are randomly hired by a woman, portrayed by Susan Hayward, to rescue her husband (Hugh Marlowe). Rita Moreno appears at the beginning of the film as a Mexican cantina singer/dancer.

En route to California to prospect for gold, ex-sheriff Hooker (Gary Cooper), professional gambler Fiske (Richard Widmark) and bounty hunter Luke Daly (Cameron Mitchell) are forced to stop over in a tiny Mexican village by engine trouble on the ship they are taking. A desperate Leah Fuller (Susan Hayward) hires the three men and local Vicente Madariaga, to rescue her husband, John ( Hugh Marlowe), who is pinned under debris from a gold mine cave-in in hostile Apache territory.

During the harrowing journey, Daly tries to force himself on Leah late one night, forcing Hooker to intervene. Leah tells Hooker that where her husband is trapped, was once a boom town, but a volcanic eruption wiped it out, leaving only a church steeple and the mine uncovered by lava. The resident priest called it the "garden of evil". The Indians now consider the volcano sacred. The group then arrives at the mine. Finding John unconscious, they free him.

Before John wakes up, Hooker sets the man's broken leg. When John regains consciousness, he accuses Leah of using him to get gold. Hooker talks to Leah later, about what her husband said; after he tells her that he has spotted signs of Apaches nearby, she offers him and the others all the gold they have dug up to take her husband away that night, while she remains behind to make it look like they are all still there. The cynical Fiske unexpectedly offers to stay with her, but when he asks her what he is to her, she tells him, "you're nothing at all, just nothing."

When they are ready to leave, Leah is true to her word, but Hooker knocks her out and takes her along. When they stop to rest, realizing he is fatally slowing them down, John talks Luke into helping him onto a horse; he then rides off. When Hooker shows up, Daly draws his pistol, but is killed by an arrow in the back. At a burnt-out mission, they find John dead and hung upside down on a cross. Vicente is the next to fall. At a choke point in the cliff-hugging path, which is the only way out, the two remaining men draw cards to see who will stay behind to hold off the Indians while the other rides with Leah to safety. Fiske "wins" and succeeds in killing or driving off most of their pursuers. After seeing that Leah is safe, Hooker shoots a few more Apaches and returns to talk with a dying Fiske, who admits he cheated on the card draw to guarantee he would stay behind. Fiske urges Hooker to settle down with Leah. Hooker catches up with Leah, and they ride off into the sunset together.

A ship full of fortune hunters bound for the California gold fields breaks down off the coast of Mexico, stranding a former sheriff named Hooker (Gary Cooper), a gambler named Fiske (Richard Widmark) and a bounty hunter named Luke Daly (Cameron Mitchell) in Porto de Miguel. The three are bemoaning their bad luck when Fiske decides to tell Daly’s fortune with cards while they’re sitting in a saloon. He draws a red queen, and in walks Leah Fuller (Susan Hayward) seeking help. She and her husband have a gold mine in the wilds of Mexico, but he’s been trapped by a cave-in. She needs rescuers, and she’s willing to offer $2,000 per man. The possibility of being led to a gold mine by a pretty redhead is too much for the three to pass up, and they sign on along with a Mexican named Vicente. Little do they know they’re bound for a place the Indians consider sacred ground — the Garden of Evil, where a volcano buried a town and chased the white man from the country. Getting to the gold mine isn’t easy; getting out will be even tougher. Leah’s husband John Fuller (Hugh Marlowe) has a broken leg. And the Indians are watching the tiny group’s every move.