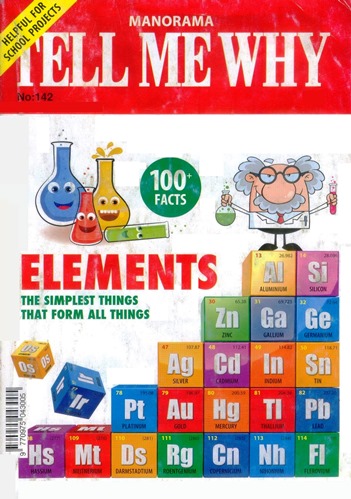 ALL ABOUT ELEMENTS
Xu Fu, the renowned alchemist in Ancient China, once came up with an elixir for immortality. The Emperor of China who longed to be immortal, consumed the medicine first. But to everyone's dismay, the emperor turned insane, and eventually died.
The cause of death was nothing but Xu Fu's secret medicine itself - mercury, a toxic element. Once used as a medicine, the element mercury is toxic enough to take one's life. But not all elements are toxic, and to be feared. In fact, life itself can not exist without elements.
Man, for exa mple, survives by breathing oxygen, whereas plants need the element nitrogen to grow. In other words, elements are the building blocks of the universe. In fact, everything you see or touch, is com posedof one or more of 94 elements.
This issue of 'Tell Me Why' helps you explore the absorbing and incredible world of elements.