Doctor Strange In The Multiverse of Madness (2022)

Doctor Strange In The Multiverse of Madness (2022) 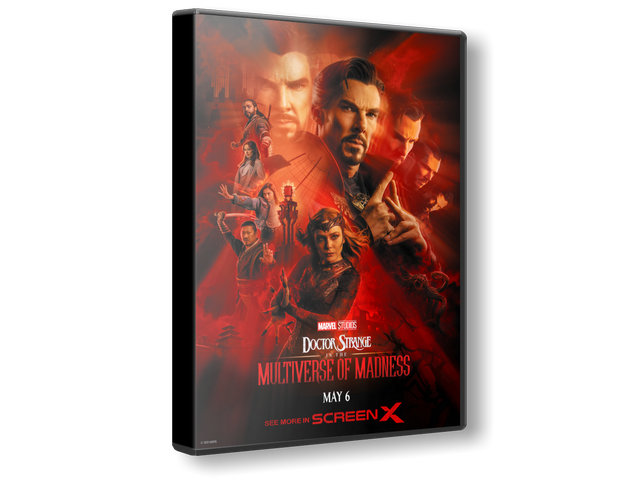 Doctor Strange in the Multiverse of Madness is a 2022 American superhero film based on Marvel Comics featuring the character Doctor Strange. Produced by Marvel Studios and distributed by Walt Disney Studios Motion Pictures, it is the sequel to Doctor Strange (2016) and the 28th film in the Marvel Cinematic Universe (MCU). The film was directed by Sam Raimi, written by Michael Waldron, and stars Benedict Cumberbatch as Stephen Strange, alongside Elizabeth Olsen, Chiwetel Ejiofor, Benedict Wong, Xochitl Gomez, Michael Stuhlbarg, and Rachel McAdams. In the film, Strange protects America Chavez (Gomez), a teenager capable of travelling the multiverse, from Wanda Maximoff (Olsen).

Doctor Strange director and co-writer Scott Derrickson had plans for a sequel by October 2016. He signed to return as director in December 2018, when Cumberbatch was confirmed to return. The film's title was announced in July 2019 along with Olsen's involvement, while Jade Halley Bartlett was hired to write the film that October. Derrickson stepped down as director in January 2020, citing creative differences, with Waldron and Raimi joining the next month and starting over. They added elements of the horror genre that Raimi had worked with previously, and made Maximoff the villain of the film, continuing her story from the series WandaVision (2021). Filming began in November 2020 in London but was put on hold in January 2021 due to the COVID-19 pandemic. Production resumed by March 2021 and concluded in mid-April in Somerset. Shooting also occurred in Surrey and Los Angeles.

Doctor Strange in the Multiverse of Madness premiered at the Dolby Theatre in Hollywood on May 2, 2022, and was released in the United States on May 6, as part of Phase Four of the MCU. The film has grossed $451 million worldwide, making it the third highest-grossing film of 2022, and received generally positive reviews from critics, who praised Raimi's direction, the visual effects, musical score, and performances of the cast (particularly Cumberbatch, Olsen, and Gomez).

America Chavez and a version of Stephen Strange are chased by a demon in the space between universes while searching for the Book of Vishanti. Strange is killed and Chavez accidentally creates a portal that transports herself and Strange's corpse to Earth-616, where that universe's version of Strange rescues Chavez from an octopus demon with help from the Sorcerer Supreme, Wong. Chavez explains that the demons are hunting her because she has the power to travel through the multiverse.

Recognizing witchcraft runes on the demon, Strange consults Wanda Maximoff for help but realizes that she is responsible for the attacks. After acquiring the Darkhold and becoming the Scarlet Witch, Maximoff believes that controlling Chavez's powers will allow her to reunite with Billy and Tommy, the children she created during her time in Westview.When Strange refuses to surrender Chavez, Maximoff attacks Kamar-Taj, killing many sorcerers. Chavez accidentally transports herself and Strange to Earth-838 while Maximoff uses the Darkhold to "dream-walk", taking control of her Earth-838 counterpart, who lives a suburban life with her own Billy and Tommy. A surviving sorceress sacrifices herself to destroy the Darkhold and break the dream-walk. Enraged, Maximoff forces Wong to lead her to Mount Wundagore, a forbidden ancient ruin, to reestablish the dream-walk.

While searching for help, Strange and Chavez are apprehended by Earth-838's Sorcerer Supreme, Karl Mordo, and brought before the Illuminati, a group consisting of Mordo, Peggy Carter, Blackagar Boltagon, Maria Rambeau, Reed Richards, and Charles Xavier. They explain that through reckless use of their universe's Darkhold in an attempt to defeat Thanos, Earth-838's Strange triggered a universe-destroying "incursion". After defeating Thanos through other means, the Illuminati executed their Strange to prevent him from causing more harm. Mordo believes that Earth-616's Strange is similarly dangerous, but Maximoff re-establishes her dream-walk at Mount Wundagore and arrives in her Earth-838 counterpart's body before they can pass judgment. She slaughters all of the Illuminati members except Mordo, while Strange and Chavez escape with help from the Earth-838 counterpart of Strange's ex-fiancé Christine Palmer, a scientist working with the Illuminati.

Strange, Chavez, and Palmer enter the space between universes to find the Book of Vishanti, the antithesis to the Darkhold, but Maximoff appears and destroys it. She then takes over Chavez's mind, using her powers to send the others to an incursion-destroyed universe. Back in Earth-616, Maximoff begins the spell to take Chavez's powers. Strange defeats the destroyed universe's Strange, who has been corrupted by his universe's Darkhold, and uses it to dream-walk in the corpse of the deceased alternate Strange that Chavez was with earlier. With Wong's help, Strange saves Chavez from Maximoff and encourages Chavez to use her abilities. She transports Maximoff to Earth-838, where she sees Billy and Tommy recoil from her in fear while crying for their real mother. Maximoff relents and uses her powers to bring down Mount Wundagore, destroying all copies of the Darkhold throughout the multiverse and apparently sacrificing herself in the process. Chavez returns Strange and Palmer to their respective universes.

Sometime later, Kamar-Taj is repaired as the surviving sorcerers, joined by Chavez, continue training. Strange develops a third eye as a result of using the Darkhold and dream-walking into a corpse. In a mid-credits scene, Strange is approached by a sorceress who warns him that his actions have triggered an incursion that he must help fix. Strange follows her into the Dark Dimension.