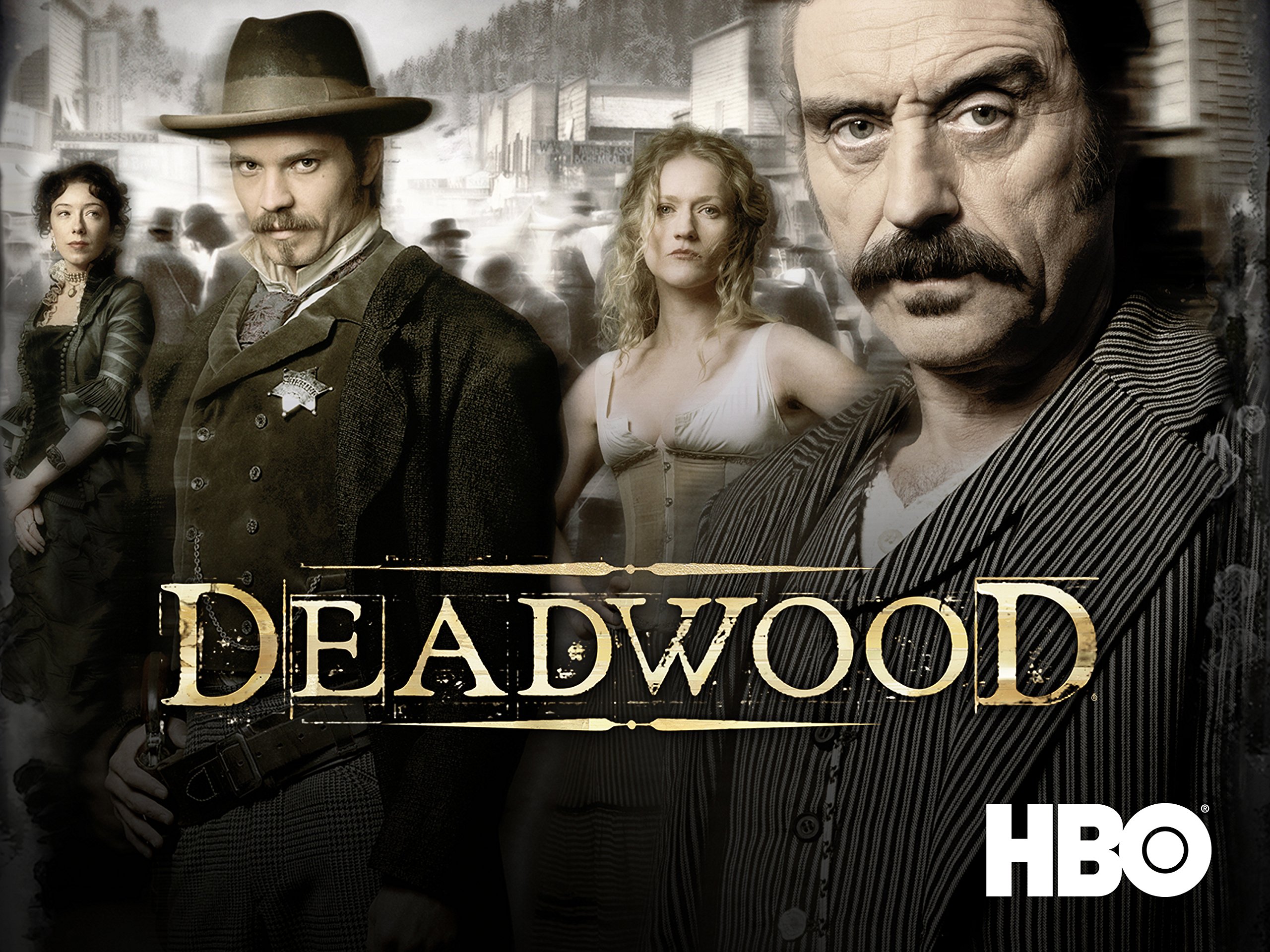 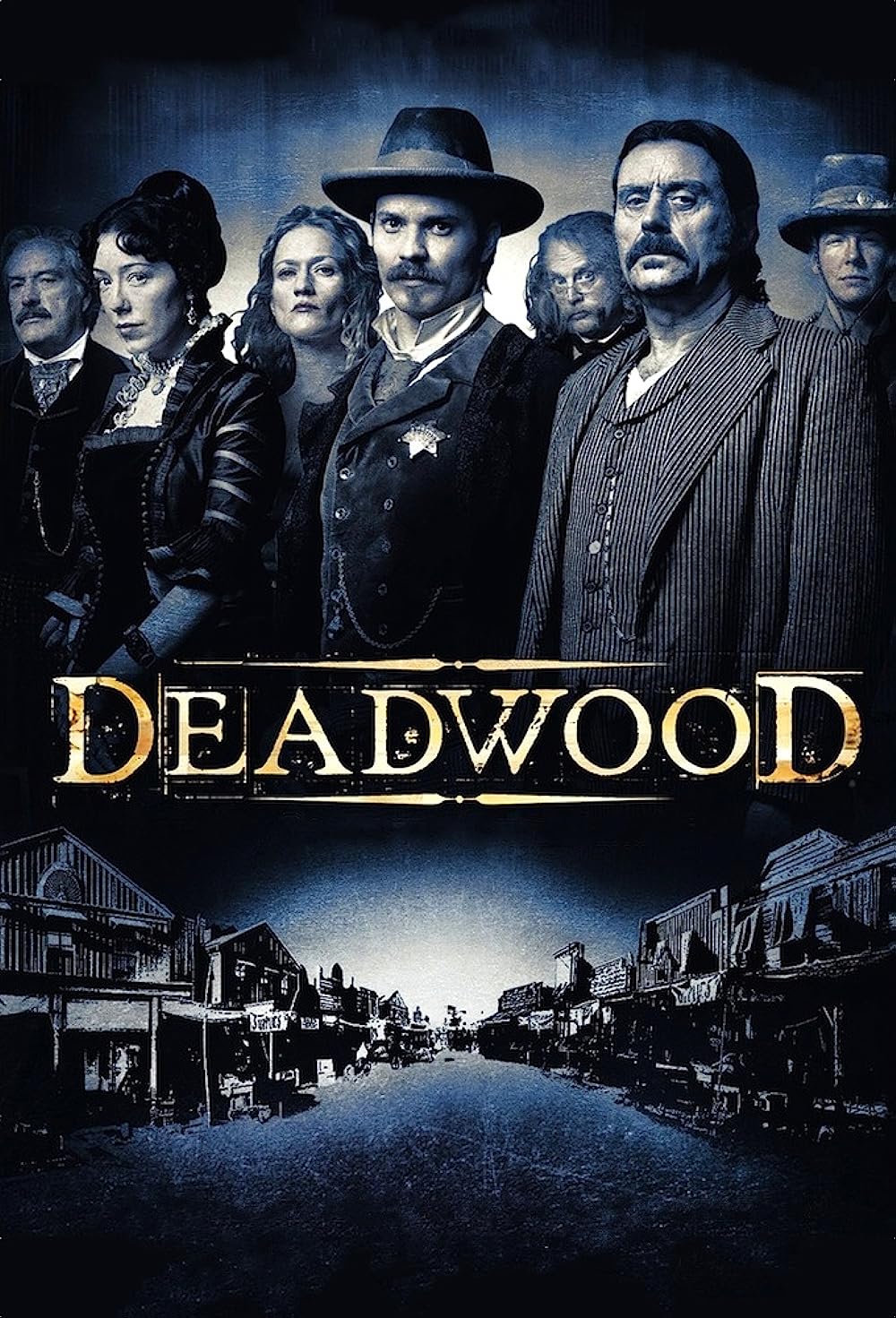 Deadwood: Created by David Milch. With Timothy Olyphant, Ian McShane, Molly Parker, Brad Dourif. A show set in the late 1800s, revolving around the characters of Deadwood, South Dakota; a town of deep corruption and crime.

The town of Deadwood, South Dakota in the weeks following the Custer massacre is a lawless sinkhole of crime and corruption. Into this uncivilized outpost ride a disillusioned and bitter ex-lawman, Wild Bill Hickok, and Seth Bullock, a man hoping to find a new start for himself. Both men find themselves quickly on opposite sides of the legal and moral fence from Al Swearengen, saloon owner, hotel operator, and incipient boss of Deadwood. The lives of these three intertwine with many others, the high-minded and the low-lifes who populate Deadwood in 1876 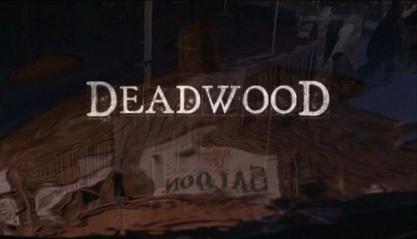 
Deadwood is an American Western television series that aired on the premium cable network HBO from March 21, 2004, to August 27, 2006, spanning three seasons and 36 episodes. The series is set in the 1870s in Deadwood, South Dakota, before and after the area's annexation by the Dakota Territory, and charts Deadwood's growth from camp to town. The show was created, produced, and largely written by David Milch.[1] Deadwood features a large ensemble cast headed by Timothy Olyphant and Ian McShane, playing the real-life Deadwood residents Seth Bullock and Al Swearengen, respectively. Many other historical figures appear as characters, including George Crook, Wyatt Earp, E. B. Farnum, George Hearst, Wild Bill Hickok, Calamity Jane, Jack McCall, and Charlie Utter. The plot lines involving these characters include historical truths as well as substantial fictional elements. Milch used actual diaries and newspapers from 1870s Deadwood residents as reference points for characters, events, and the look and feel of the show.

Deadwood received wide critical acclaim, particularly for Milch's writing and McShane's performance, and is now regarded as one of the greatest television shows of all time.[2] It also won eight Emmy Awards (in 28 nominations) and one Golden Globe. TV Guide ranked it #8 on its 2013 list of 60 shows that were "Cancelled Too Soon".[3] The show was produced by Red Board Productions and Roscoe Productions in association with HBO and Paramount Network Television.

After several years of discussion and pre-production, Deadwood: The Movie began filming in October 2018. The film is set ten years after the end of the third season and premiered on HBO on May 31, 2019.