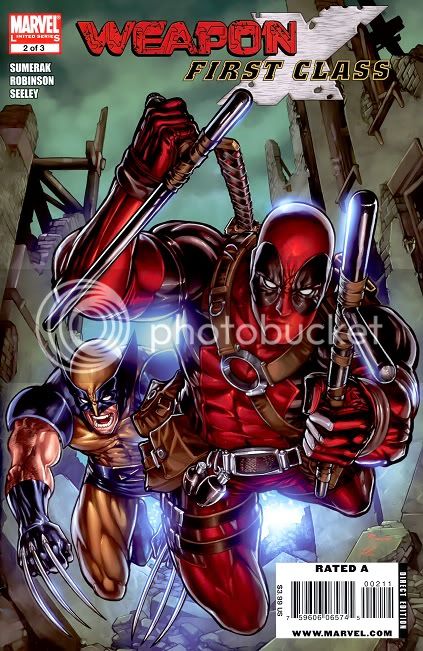 A disfigured and mentally unstable mercenary, Deadpool originally appeared as a villain in an issue of New Mutants, and later in issues of X-Force. The character has since starred in several ongoing series, and shares titles with other characters such as Cable. The character, known as the "Merc with a Mouth", is famous for his talkative nature and his tendency to "break the fourth wall", which is used by writers for humorous effect. Deadpool was ranked 182nd on Wizard magazine's list of the Top 200 Comic Book Characters of All Time[2] ranked 45th on Empire magazine's list of The 50 Greatest Comic Book Characters,[3] and placed 31st on IGN's list of the Top 100 Comic Book Heroes.[4]

Created by artist Rob Liefeld and writer Fabian Nicieza, Deadpool made his first appearance in the pages of New Mutants #98 published in February 1991. Rob Liefeld, a fan of the Teen Titans comics, showed his new character to then writer Fabian Nicieza. Upon seeing the costume and noting his characteristics (killer with super agility), Nicieza contacted Liefeld, saying "this is Deathstroke from Teen Titans." Nicieza gave Deadpool the real name of "Wade Wilson" as an in-joke to being "related" to "Slade Wilson", Deathstroke.[5] In his first appearance, Deadpool was hired by Tolliver to attack Cable and the New Mutants. After subsequently appearing in X-Force as a recurring character, Deadpool began making guest appearances in various different Marvel Comics titles such as the Avengers, Daredevil, and Heroes for Hire. In 1993 the character received his own miniseries, entitled The Circle Chase, written by Fabian Nicieza and pencilled by Joe Madureira. It was a relative success, and Deadpool starred in a second, self-titled miniseries written in 1994 by Mark Waid, pencilled by Ian Churchill, and inked by Jason Temujin Minor and Bud LaRosa.

In 1997, Deadpool was given his own ongoing title, initially written by Joe Kelly, with then-newcomer Ed McGuinness as an artist. The series firmly established his supporting cast, including his prisoner/den mother Blind Al and his best friend Weasel. Deadpool became an action comedy parody of the cosmic drama, antihero-heavy comics of the time. The ongoing series gained cult popularity for its unorthodox main character and its balance of angst and pop culture slapstick and the character became less of a villain, though the element of his moral ambiguity remained. The writer Joe Kelly noted, "With Deadpool, we could do anything we wanted because everybody just expected the book to be cancelled every five seconds, so nobody was paying attention. And we could get away with it."[6]

The series was taken over by Christopher Priest who noted that he found Kelly's issues to be "complex and a little hostile to new readers like me' and that by issue 37, he realized that 'it was okay to make Deadpool look stupid".[7]
[edit] 2000s

Deadpool lasted until issue #69, at which point it was relaunched as a new title by Gail Simone with a similar character called Agent X in 2002. This occurred during a line wide revamp of X-Men related comics, with Cable becoming Soldier X and X-Force becoming X-Statix. Simone notes that 'When I took the Deadpool job, the revamp hadn't been planned, so it was a complete surprise. Thankfully, we heard about it in time to make adjustments to the early scripts'.[8] It appeared that Deadpool was killed in an explosion fighting the aristocratic (and telepathic) villain known as the Black Swan. Weeks later, a mysterious figure showed up at the apartment of Deadpool's manager, Sandi Brandenberg. The man took the name Alex Hayden and together they started "Agency X," with Hayden dubbed Agent X after the company. Most believed that Hayden was Deadpool suffering from amnesia. The title character of Agent X was eventually revealed not to be Deadpool and the climax of that series saw the original character restored. Simone left the title after seven issues due to creative differences with the series editor.[9]

Deadpool's next starring appearance came in 2004 with the launch of Cable & Deadpool written by Fabian Nicieza, where Deadpool became partnered with his former enemy, Cable, teaming up in various adventures. This title was canceled with issue #50 and replaced by a new Cable series in March 2008.[10] Deadpool then appeared briefly in the Wolverine: Origins title by writer Daniel Way before Way and Paco Medina launched another Deadpool title in September 2008.[11] Medina was the main series artist, with Carlo Barberi filling in on the first issue after the Secret Invasion tie-in.[12]

A new Deadpool ongoing series written by Daniel Way with artist Paco Medina began as a Secret Invasion tie-in. In the first arc, the character is seen working with Nick Fury to steal data on how to kill the Skrull queen Veranke.[13][14] Norman Osborn steals the information that Deadpool had stolen from the Skrulls, and subsequent stories deal with the fallout from that. Writer Daniel Way explained, "the first thing Osborn does to try and take care of the situation is to bring in a hired gun to take Deadpool down, which would be Tiger-Shark. That would be the standard thing to do, but of course everything about Deadpool is non-standard. So it goes completely awry and Norman has to get more serious about things."[15] The story also sees the return of Bob, Agent of HYDRA, "I don't want the book to become 'Deadpool and Friends' so characters will drift in and out, but Bob was someone I definitely wanted to bring in. It just had to be at the perfect moment and when I was putting this storyline together that moment presented itself.".[15] This all led directly to a confrontation with the new Thunderbolts in "Magnum Opus" which crossed over between Deadpool vol. 4 #8-9 and Thunderbolts #130-131.[15] Thunderbolts writer Andy Diggle said, "it's a natural progression for Deadpool to go after Norman, and for Norman to send his personal hit-squad after Deadpool."[16] In Deadpool #15, Deadpool decides to become a hero resulting in conflicts with proper heroes like Spider-Man[17] (who he had recently encountered in The Amazing Spider-Man #611 as part of "The Gauntlet"[18]) and leading to a 3-issue arc where he takes on Hit-Monkey,[19] a character who debuted in the same month in a digital, then print, one-shot.[20][21]

Another ongoing Deadpool series, Deadpool: Merc with a Mouth launched in July 2009, written by Victor Gischler, with art by Bong Dazo. In it Deadpool teams up with the head of the zombie Deadpool from Marvel Zombies 3 and 4.[22][23][24]

A special anniversary issue titled Deadpool #900 was released in October 2009. It features stories written by several authors, with the main feature written by the original Deadpool series writer Joe Kelly and drawn by Deadpool's creator Rob Liefeld. A third Deadpool ongoing series, Deadpool Team-Up, launched in November 2009 (with issue numbers counting in reverse starting with issue #899), written by Fred Van Lente, with art by Dalibor Talajic. This series features Deadpool teaming up with different heroes from the Marvel Universe in each issue, such as Hercules.[25] Deadpool also joined the cast of the new X-Force team.[26]

Another Deadpool series, entitled Deadpool Corps also by Gischler, was released in April 2010. This series featured alternate versions of Deadpool, consisting of Deadpool, Lady Deadpool (who debuted in Deadpool: Merc with a Mouth #7), Headpool (a.k.a. The zombie Deadpool head), and two new characters; Kidpool, a kid version of Deadpool who uses lightsabers, and Dogpool, a dog version of Deadpool.[27][28] The series lasted 12 issues.