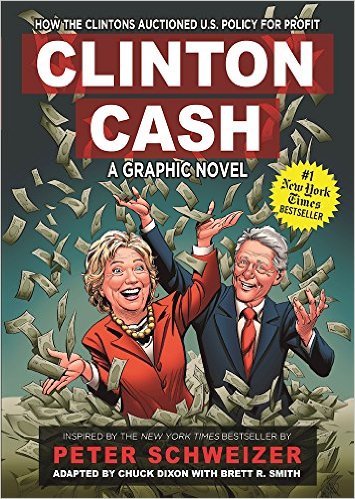 "Every American needs to buy it, read it, and become fully literate in the Clinton scams. It's like the most explosive candidate opposition file that every American can access." - Breitbart News

Based on the New York Times bestseller Clinton Cash by Peter Schweizer, this graphic novel retells in high-definition detail the tale of the Clintons' jaw-dropping auctioning of American power to foreign companies and Clinton Foundation donors.

Inside, readers will learn why Hillary Clinton approved the transfer of 20% of all U.S. uranium to Putin's Russia; why Bill Clinton's speaking fees soared during Hillary's tenure as Secretary of State; how the Clintons bilked Keystone Pipeline investors; how Hillary's brother scored a rare "gold exploitation permit" from the Haitian government; and so much more.

Stunningly illustrated, hilariously retold, and inspired by the blockbuster book that reshaped the contours of the presidential election, Clinton Cash: A Graphic Novel brings to life Hillary and Bill's brazen plot to fleece the planet for maximum profit.