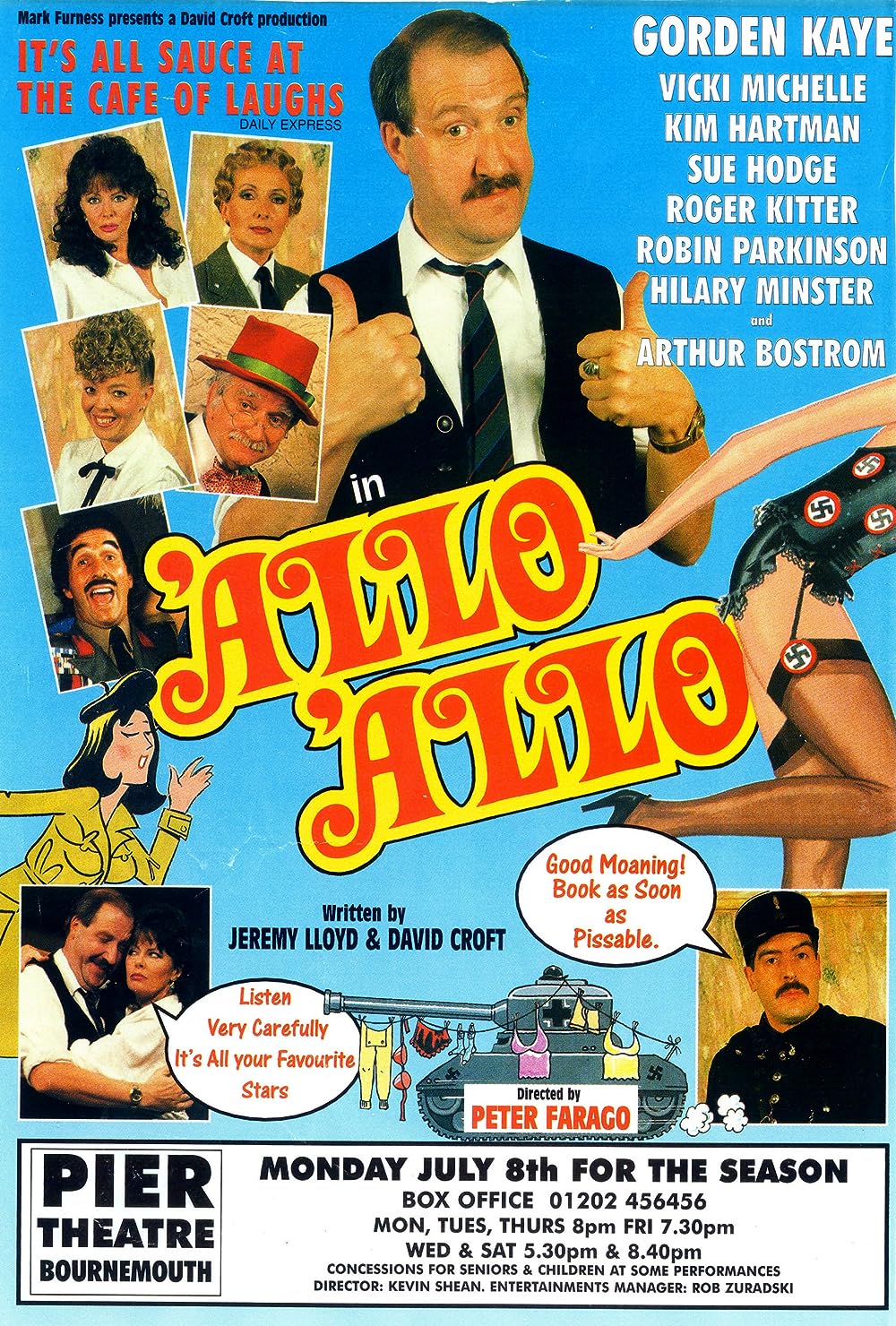 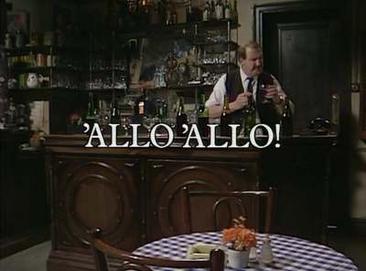 'Allo 'Allo! is a British sitcom television series created by David Croft and Jeremy Lloyd, starring Gorden Kaye, and originally broadcast on BBC One. The sitcom focuses on the life of a French café owner in Nouvion, during the German occupation of France in the Second World War, who has to deal with problems caused by a dishonest German officer, a local French Resistance leader, a stolen painting, and a pair of trapped British airmen, while concealing from his wife the secret affairs he is having with his waitresses. Croft and Lloyd devised the concept as a parody of BBC wartime drama Secret Army, and initially launched the programme with a pilot on 30 December 1982. The sitcom was eventually commissioned following the success of the pilot, and ran for nine series between 7 September 1984 until its conclusion on 14 December 1992. Both Lloyd and Croft wrote the scripts for the first six series, while the remainder were handled by Lloyd and Paul Adam.

Much like previous sitcoms created by Croft and Lloyd, the programme employed notable elements such as memorable catchphrases and ending credits, cultural clichés, physical humour and visual gags. However, 'Allo 'Allo! differed from these other sitcoms by featuring overarching plotlines rather than simple stand-alone stories, and the device of having actors speaking English but with theatrical foreign accents to distinguish each character's nationality. The sitcom proved popular with viewers and drew respectable ratings during its broadcast, with its success leading to it receiving stage show reproductions. A special entitled The Return of 'Allo 'Allo!, aired on 22 March 2007, featured a number of cast members returning to reprise their original roles to perform in a special story after the conclusion of the programme, alongside a documentary about the sitcom including a highlight reel of episodes, and interviews with the cast, production team and fans.


'Allo 'Allo! is set during the Second World War, between the occupation of France by German Axis powers in 1940 and its eventual liberation by Allied forces in July 1944. The story of the sitcom focuses on René Artois, a café owner in Nouvion and a reluctant member of the town's local French Resistance cell who operates under the codename of "Nighthawk". Because of the occupation of the town by German forces, led by the dictatorial Major-General Erich von Klinkerhoffen, René finds himself caught up between dealing with four problems – the scheme and plots of the town's corrupt commandant, Colonel Kurt von Strohm; the sabotage plans of the Resistance's leader Michelle Dubois; the efforts by Gestapo agent Herr Otto Flick to find a stolen painting and unmask Resistance members; and the love affairs with his waitresses, particularly Yvette Carte-Blanche, each of which he must conceal from both his wife Edith and each of the other waitresses.

Throughout the programme's broadcast, the sitcom features a number of overarching storylines, with two of these being the most prominent within episodes. The first, and most prominent plot, concerns the theft of a valuable painting from the town's chateau – The Fallen Madonna by fictional artist van Klomp (usually referred to as "The Fallen Madonna with the Big Boobies") – stolen by von Strohm, and the subsequent effort by him to conceal the theft from his superiors and Herr Flick. René is notably forced into handling the stolen painting out of threat of execution, but also due to being indebted to von Strohm for allowing him to fake his death when he is sentenced to execution for unjustified accusations of aiding the Resistance in an act of sabotage. The painting itself is subjected to being lost during the course of its concealment, before receiving a forged copy upon being found, only for it be lost again and sought out by not only by von Strohm, but also Herr Flick who, rather than return it to Berlin, intends to keep it himself.

The second storyline concerns the involvement of two stranded British airmen, shot down while over Nouvion. Because of their predicament, several plots in a number of episodes focus on the efforts of Michelle to devise plans that can help to send them back to England, with René not only forced to help hide them within his café or keep them under disguises, but also help in her schemes, sometimes devised by London who relay these plans via a radio installed within the bedroom of Edith's mother. Often, the schemes devised are so complicated, that they invariably backfire, especially when they collide with other schemes conducted by von Strohm and his assistants, leaving him, René and Michelle often worse off than before. Most other storylines concern various events that occur, including the efforts to remove von Klinkerhoffen's replacement from power, sabotaging the Germans' plan to invade England, and the subsequent build-up of German concern about an Allied invasion of France following the defeat of Italy.[1][2]

Lloyd & Croft sitcom elements[edit]
As with previous sitcoms created before 'Allo 'Allo!, such as Lloyd and Croft's earlier collaboration Are You Being Served?, much of the humour is derived from classic elements of comedy including classic farce set-ups, physical comedy and visual gags, alongside a large amount of sexual innuendo, and a fast-paced running string of broad cultural clichés. Like most characters devised for previous sitcoms, the cast for the programme were designed with notable elements to distinguish them throughout the series, whether it is a catchphrase, gimmick, or saying.

Like previous sitcoms devised by the creators, 'Allo 'Allo! ends each episode with the caption "You have been watching (in order of appearance)", followed by a short vignette shot of actors who performed in the episode – whether as a main or supporting character – identified by their name in caption within each sequence. Although the shots appear like a clip from the episode, the production team conduct a separate filming session aimed as a reenactment of a scene the actor was involved in, mostly pertaining to a specific camera angle or action conducted by their character, with the vignette sequence often done in order of their first spoken line; the exception to this is that actor Gorden Kaye is always first in the sequence, regardless of when his first appearance is made.

"René Recaps" device[edit]
As each episode builds on previous ones, viewers are often required to have followed the series to the episode they have reached in order to understand the plot. As 'Allo 'Allo! revolved around individual story arcs spread across several episodes, the creators opted for using a comical version of the "As you remember ..." device, commonly used in serials, to acts as a recap of events in the current story for the beginning of a new episode. This device within the sitcom was always conducted by René, who would open an episode by breaking the fourth wall (which Michael Bates did in It Ain't Half Hot Mum) to interact with the audience and provide a brief summary of events that had occurred previously, including notable events that had taken place, and also intermittently during episodes to make comic comments. The use of this plot device within the sitcom had considerable benefits for re-runs, as it allowed local TV stations who had reshuffled episodes for their schedule to ensure that their audiences could be aware of the plot events surrounding the story of the episode being broadcast.

"Foreign" languages[edit]
One of the trickier problems with 'Allo 'Allo! was the fact that the main characters were of four different nationalities – French, German, English, and Italian. Lloyd and Croft determined that it would be too much for the audience to follow multiple languages, so they employed a simple dramatic device to overcome the issue: all characters would speak English in a theatrical foreign accent depicting the foreign language. French and German characters could understand each other when speaking, but the English characters could not understand the others without someone "translating" for them and vice versa.

Because of this device, each particular main language for the show required a specific accent and speaking style to be devised. While the French-speaking characters mainly spoke with a French accent, the English-speaking characters mostly employed Bertie Wooster-esque "top-hole, old chap!"-style banter in an upper-class English accent, and German speaking characters mainly spoke in a guttural manner. When Italian characters were added to the series, particularly Captain Alberto Bertorelli, in the fourth series, the cast members assigned to these role spoke in a nasal tone, making use of the letter "a" on the ends of certain words (i.e. "What a mistake-a to make-a!").

One of the more notable aspects of this device was in the speech of Officer Crabtree, introduced in the second series. Because his character was English with a poor grasp of French, the actor, Arthur Bostrom, spoke perfectly in the English style but mangled his words when speaking in the French style. Bostrom therefore altered certain words in his sentences, substituting different vowels and/or consonants, changing them into different or nonsensical words, usually laden with innuendo. An example is the line "I was passing by the door, and I thought I would drop in.", which Bostrom pronounced "I was pissing by the door, and I thought I would drip in". Another example is Crabtree's greeting of "good morning", pronounced good moaning. Furthermore, this greeting was used no matter what the time of day, perhaps reflecting the fact that there is no French translation of the greeting.