All About History: Book of Julius Caesar (2nd Ed) 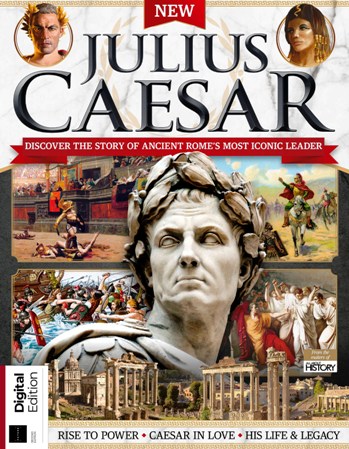 Julius Caesar. one of Ancient Rome's most famous rulers and important names in the pages of history. was key in the development and growth of what we know today as the Roman Empire. The All About History Book of Julius caesar will detail everything you need to know about the Roman general. from his personal relationships that caused major controversy. such as with Cleopatra. to the political campaigns that eventually lost him control over the Roman Republic and led to his tragic assassination at the hands of his own kin. It will also guide you through the cultural and political history of Ancient Rome. including how it went from a mighty kingdom to a crumbling republic, how the Roman people lived their lives and the deities they worshipped. From Caesar's early life to his untimely demise. follow the footsteps of one of the greatest military leaders of all time and discover the endming legacy he left behind.

History of Ancient Rome
10 The legend of Rome
18 Bluffer's guide: The Fall of the Roman Republic
20 The rise of the Roman Empire
22 Dining deities and spirits of the pantry
28 Birth of the Senate
34 How to become a Roman consul
36 How the Romans lived
42 Day in the life
44 Underworld of Ancient Rome
Rise to power
50 Caesar's ancestors & descendants
54 The origins of a legend
58 Caesar's rise to power
66 The First Triumvirate
70 Caesar's military conquests
78 Caesar's invasion of Britain
86 Enemies of the State
92 Caesar in love
98 Cleopatra: Queen of Egypt
104 Voice of Rome
Downfall & Demise
110 The true Julius Caesar
114 Dictator's handbook
116 Beware the Ides of March
126 The Second Triumvirate
128 The art of succeeding Caesar
132 Like father. like son?
136 The man and the myth
142 A Dictator's enduring legacy