All About History: Book of Greek Mythology - September 2019 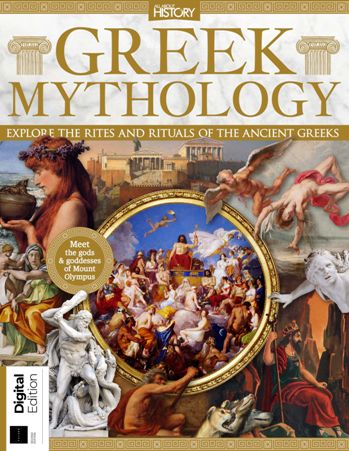 Ancient Greek myths and legends have been told through the written word on the pages of great books, poems, plays and film scripts, the imagery on pottery, artists' canvasses and sculptures and even through spoken word throughout history. The tales that have captivated many a mind have served as great moral triumphs and lessons and have highlighted the many pitfalls, imperfections and crucial mistakes of the infamous gods, goddesses and heroes of whom they are based upon.
The Book of Greek Mythology will explore the origins of mythology in Ancient Greece and how the belief systems in Greece shaped their society into one of the greatest empires in history. It will also look at the influence and impact of the great legends on both the Ancient Greek people and the many great minds that have drawn inspiration from them in the thousands of years since. Fact will be separated from the fiction and the stories explored as we discover the legend of Mount Olympus and the Underworld, the divine deities; Zeus, Aphrodite, Hera, Hades and Persephone and the great beasts; Scylla, Pegasus and Cyclops. Finally, we will find out how the tall tales have weathered over time with the intellectual breakthroughs in philosophy and psychology and exactly what their lasting legacy looks like today.

LIFE & SOCIETY
10 Map of Ancient Greece
12 The beginnings of Ancient Greece
20 Everyday life in Ancient Greece
30 The Ancient Olytnpics
36 The art of architecture
40 Greek teinples
42 The Greeks and their religion
MYTHS & LEGENDS
48 Greek god family tree
54 Dawn of Greek deities
62 Olympus: Home of the gods
66 The Twelve Olympians
68 Death and the Underworld
74 Divinities of death
76 Greek legend
82 The lessons of Greek Myths
92 Beasts of Myth and Legend
102 Secrets of the Oracle
108 The truth behind the Trojan War
ART & CULTURE
118 The legend of Homer
122 Art and Myth
128 The philosophy of Ancient Greece
134 Modern perspectives on Greek Mythology
138 Legacy of the Greek Myths