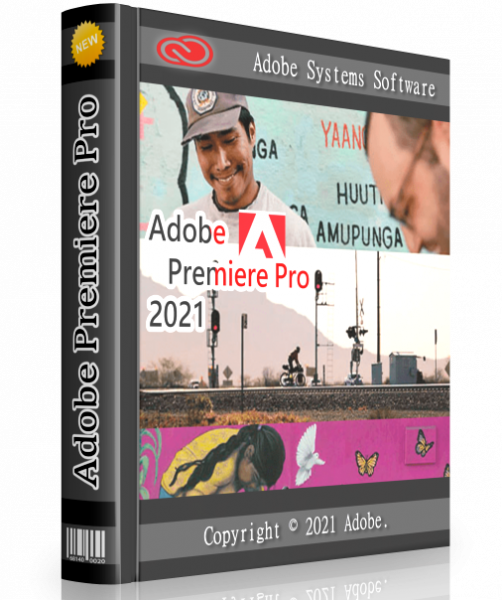 Size: 1.65 GB | Languages: Multilingual
​
Powerful video editing software
Adobe Premiere Pro is a video editing software that is included in the Adobe Creative Cloud. It can also be installed independently from Adobe CC to your Mac OS or Windows PC. It has been used by professionals to edit movies, television shows, and online videos, but its comprehensive set of editing tools enables all users to produce their own content. With Adobe Premiere, you can trim, splice and enhance different file formats as well as complete common video editing tasks to deliver broadcast-quality, high-definition videos.

Editing
Adobe Premiere Pro is used by both new and seasoned editors. This is because it has a non-linear video editing interface that allows all users to easily change the order of the media or revoke previous decisions. This is done on its built-in edit decision list or EDL. The EDL is vital to editors that create long-form videos as it contains an ordered list of reel and timecode data. In addition, Adobe Premiere has an extensive set of editing tools to edit videos, images, and audio.
You will be using the Selection tool the most as it enables you to perform basic selections and edits such as marking specific edit points, selecting multiple clips and trimming audio tracks. You can also opt to use the Track Select Forward/Backward tool as it allows you to select all of your media forward or backward. This means it will move all file formats as it is displayed on the list.
Advertisement
In the post-production process, you will be using the Ripple Edit and Rolling Edit tools the most. The Ripple Edit tool trims one clip and ripples the clips that proceed it, effectively closing the gaps between two edit points. The Rolling Edit is suited for fine-tuning your edit points. It does this by moving the Out point and In point of two clips either forward or backward in a sequence.

File Formats
Adobe Premiere Pro supports various video and audio formats, allowing you to have the same post-production workflow as professional editors. You will find that most cameras and smartphones export media in MP4 format. Although it is a format that is supported by Adobe Premiere, some MP4 codecs may not be recognized by the program. The solution to this is to convert your MP4 file to MOV, MPEG-2 or FLV.
Another format supported by Adobe Premiere is Virtual Reality or VR. The program can detect three VR properties automatically, namely: VR Projection, VR Layout, and VR Captured View. It can also detect a VR video based on the file's frame dimensions. It can detect three frame sizes: 1:1, 2:1 and 4:1 which are Stereoscopic over/under VR, Monoscopic VR, and Stereoscopic side-by-side VR respectively.

Premier post-production program
Adobe Premiere Pro is suitable for professionals as it has a large array of features that meets the needs of editors from different industries. The program's terminologies may be overwhelming to a new user, but most of the tools are simple to use. They either use a drag-and-drop or click-and-drag motion along the EDL, which allow you to interact with your video in real-time. Overall, Adobe Premiere Pro is an easy-to-use program that enables all users to create high-quality content.