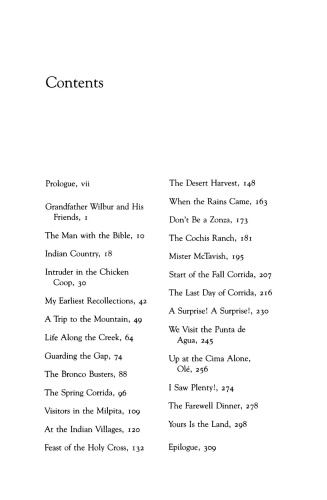 Arizona's Arivaca Valley lies only a short distance from the Mexican border and is a rugged land in which to put down stakes. When Arizona Territory was America's last frontier, this area was homesteaded by Anglo and Mexican settlers alike, who often displaced the Indian population that had lived there for centuries. This frontier way of life, which prevailed as recently as the beginning of the twentieth century, is now recollected in vivid detail by an octogenarian who spent her girlhood in this beautiful, cruel country.

Eva Antonia Wilbur inherited a unique affinity for the land. Granddaughter of a Harvard-educated physician who came to the Territory in the 1860s, she was the firstborn child of a Mexican mother and Anglo father who instilled in her an appreciation for both cultures. Little Toña learned firsthand the responsibilities of ranching-an education usually reserved for boys-and also experienced the racial hostility that occurred during those final years before the Tohono O'odham were confined to a reservation.

Begun as a reminiscence to tell younger family members about their "rawhide tough and lonely" life at the turn of the century, Mrs. Wilbur-Cruce's book is rich with imagery and dialogue that brings the Arivaca area to life. Her story is built around the annual cycle of ranch life-its spring and fall round-ups, planting and harvesting-and features a cavalcade of border characters, anecdotes about folk medicine, and recollections of events that were most meaningful in a young girl's life. Her account constitutes a valuable primary source from a region about which nothing similar has been previously published, while the richness of her story creates a work of literature that will appeal to readers of all ages.