1066: The Hidden History in the Bayeux Tapestry 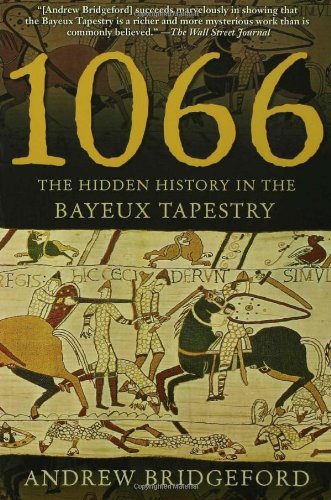 For more than nine hundred years the Bayeux Tapestry?one of the world's greatest historical documents and artistic achievements?has preserved the story of one of history's greatest dramas: the Norman Conquest of England, culminating in the death of King Harold at the Battle of Hastings in 1066. Historians have held for centuries that the majestic tapestry?almost 300 feet in length?trumpets the glory of William the Conqueror and the victorious Normans. But is this true? In 1066, Andrew Bridgeford reveals a very different story that reinterprets and recasts the most decisive year in English history.

Reading the tapestry as if it were a written text, examining each scene with fresh eyes, Bridgeford discovers a wealth of new information subversively and ingeniously encoded in the threads, which appears to undermine the Norman point of view while presenting a secret tale undetected for centuries?an account of the final years of Anglo-Saxon England quite different from the Norman version of events. In the midst of it all is a mysterious French nobleman?Count Eustace II of Boulogne, descended from Charlemagne?whose own claim to the English throne rivaled Duke William's.

While building his case, Bridgeford brings to life the turbulent eleventh century in western Europe, a world of ambitious warrior bishops, court dwarfs, ruthless knights, and powerful women. 1066 offers readers a rare surprise?a book that reconsiders a long-accepted masterpiece and chain of events?and sheds new light on a pivotal chapter in English history.
"A gripping yarn . . . An exciting account of the tapestry's busy drama and engaging realism."?The Daily Telegraph

"Bridgeford marshals the battalions of his argument with analytical force, lucidity, and panache."?The Sunday Times (London)

"The Bayeux Tapestry, in the French town of Bayeux, draws half a million visitors a year. For more than 900 years it has been kept?and sometimes concealed?in several places around the town. The story of the Norman invasion of England in 1066 is set out in this masterpiece, recounting the Battle of Hastings, culminating in a victory for William the Conqueror and the death of King Harold. Although barely half a metre wide, the tapestry is about 70 metres long, embroidered on a plain linen background in wools of red, yellow, gray, green, and blue. Here are men feasting on birds, drinking from ivory horns, hunting, going to church, and loading provisions onto a ship. Bridgeford posits 'the quest of [his] book is to unravel the millennial mysteries of the work, to investigate the true origin and meaning of it, to understand more about the characters who are named in it, and to gain a new insight into some of the darkest events of the Norman Conquest.' The result is a fascinating study."?Booklist

"Definitely not the Norman version. The Battle of Hastings, in 1066, when the last Anglo-Saxon king, Harold, was defeated by William the Conqueror, is one of the world's most commented-upon battles, partly because its effects (the fusion of French and Anglo-Saxon into English, for example) ramify to this day?and partly because it was illustrated by the near-contemporary Bayeux Tapestry, a masterpiece of Medieval art. What is there new to add to the library of references? Bridgeford attempts to overturn at least two old verities about the battle. According to the author, 'close observation of the Bayeux Tapestry reveals that it is not a work of Norman propaganda that popular myth would have us believe, but a covert, subtle, and substantial record of the English version of events.' He makes a very strong case by comparing real Norman propaganda, which is codified in William of Poitier's The Deeds of Duke William (circa 1070), with the Bayeux's scenes. Scene by scene, the Bayeux tapestry deviates significantly in its sympathetic treatment of Harold from the simple-minded vilification to which he was subjected after his death at Hastings. Bridgeford goes to less used sources, such as Eadmar's The History of Recent Events in England (circa 1090), to understand the images. If he's right, then another supposed fact about the tapestry?that it was commissioned by William's half-brother Odo, the Bishop of Bayeux?seems unlikely. Bridgeford believes, instead, that the tapestry was commissioned by William's occasional ally Count Eustace of Boulogne as a peace offering to Odo, with whom Eustace was often in violent conflict. This is solid historical detective work, enlivened with extensive speculations about the tapestry's mysteries (Bridgeford, for instance, has a fascinating theory about why a dwarf named Turold holds a special place in the story). On sound empirical ground, Bridgeford's work will no doubt generate much heat and some light among students of English history."?Kirkus Reviews